The Birmingham 2022 Queen’s Baton Relay has been touring the 72 Commonwealth nations and territories for five months. During this time, many incredible women have taken on the role of Batonbearer, whilst women from Birmingham 2022’s host country, England, have been taking on their own challenges as we build up to Birmingham 2022, the first ever multi-sport event in history to award more medals to women than men.

On International Women’s Day (8th March), Birmingham 2022 is celebrating and exploring the common ground between five female Batonbearers from across the Commonwealth, and five inspiring women from Birmingham 2022’s host country, England.

Despite being over 8000km apart in distance, Batonbearer Mary Waya from Malawi and Joan Hunter, a Birmingham 2022 Hometown Hero from Birmingham, reflect each other’s passion for netball and community. Former Team Malawi Netball player Mary now dedicates her life to coaching young girls to offer them opportunities they may not otherwise have had. While Hometown Hero Joan got her start in grassroots netball and now is giving back to the community who encouraged her. She has been coaching netball in Birmingham for over 35 years and has always placed importance on putting the girls, their happiness, and their priorities first.

Batonbearer, Jayanthi Kuru-Utumpala from Sri Lanka and Naseem Akhtar BEM, Hometown Hero from Birmingham, have both taken on journeys that matter. Whilst they have taken different routes, they both have the same destination in mind: a world of empowered women. Jayanthi made history by being the first Sri Lankan to summit Mount Everest. A proud feminist, one of the many projects Jayanthi is involved with is, Delete-Nothing, an online platform which aims to support survivors of technology-based violence and abuse and highlights the importance of maintaining records of incidents of violence, for further action. Meanwhile, Naseem has spent over 20 years inspiring women in and around Birmingham, through the Saheli Hub. She set up the charity, led by women for women, to educate, motivate, inspire, and empower women through sports and activities.

Both Jayanthi and Naseem have left such a positive impact on so many lives by taking on journeys that matter across the Commonwealth.

Batonbearer Nancy Abouke from Nauru and Team England athlete Emily Campbell from Nottingham are both breaking the bias by competing in weightlifting and shining on the international sporting stage. Weightlifting used to be considered a male dominated sport – it was first introduced to the Commonwealth Games program for men in 1950, but not until 2002 for women.

Tokyo 2020 was an important milestone for both women: it was 18-year-old Nancy’s first major international competition and she walked away in 10th place in the 76kg category; while Emily won silver in the +87kg category, which made her first British women to ever win a medal in weightlifting at the Olympics. 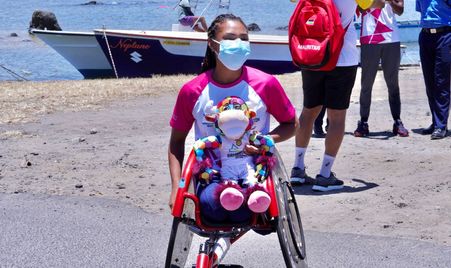 Two more athletes who are no stranger to sporting excellence are Batonbearer Noemi Alphonse from Mauritius and Alice Tai, Team England swimmer from Poole. Tokyo 2020 was also a huge moment for Noemi, she made history and became the first Mauritian para-athlete to have participated in a final of a Paralympic Games. Furthermore, Noemi set a new African record in the T54 1500m event! The seven-time world champion swimmer, Alice Tai, has represented England a plethora of times, including at Gold Coast 2018 when she won both gold and silver medals. Whilst Alice recently had surgery to have her right leg amputated below the knee, she has her sights set on returning to global competition at Birmingham 2022.

International Women’s Day is the time to celebrate the strength and greatness that connect each and every woman of the Commonwealth. As the Queen’s Baton Relay continues, more and more inspirational women are taking on the role of Batonbearer and this summer, incredible women from across the Commonwealth will descend upon to Birmingham to display their skills and talents.